skip to main | skip to sidebar

My visual art and performance art criticism deals with the juncture between modernism and postmodernism, dematerialized post-studio art, and the de-historicization of minimalism into a formalist aesthetic. Both modernism and postmodernism are highly contested, shape-shifting terrains. Modernism can be characterized by heroic gestures, the discourse of historical progress, timelessness, transcendence and universal truths, a clarity and coherence of purpose, and an optimism about the future as a tabula rasa; meanwhile the postmodern condition is marked by a destabilization of signification, a dissolution of certainty and apparency, and the ensuing vertigo in the wake of the fading reality principle. As both Ranciere and Buchloh point out, modernism itself underwent a transmogrification from its origins, and can be bifurcated between the first wave of modernists of the 1910’s and 20’s that sought to fuse art and life, had an innovative relation to form, rejected naturalism or illusionism, and attempted to rupture automatic perception (Bauhaus, Cubism, Constructivism, Dada, Futurism); and the second wave of modernism hijacked in the 1940’s by Greenberg and Fried, that advocated for a “purity,” and autonomy of mediums (Abstract Expressionism, Post-Painterly Abstraction). This second modernism, ossified and institutionalized in the era of the Cold War, came to symbolize a puritanical elitism, hierarchy, and authoritative closure. It is marked by an animus towards mass media's infiltration into fine art and its view of truth as an unproblematic seamless whole. Ironically, it is the tenets of this second modernism, which is really a caricature of the original impetus of modernism, that postmodernism was seeking to overturn.

Coming out of literary criticism at Yale, I have been largely influenced by the ramifications of the notion of “social constructionism” that came out of 1960’s post-structuralist theory, particularly Barthes' conceit of "myth", whereupon an arbitrary pattern of signification becomes naturalized, imbued with a patina of inevitability, and becomes emptied of the specifics of its historical subjectivity so as to be implanted with a false meaning. Emerging out of the breathtaking deceptions and wholesale carnage of fascism and Nazi-ism from World War II, poststructuralist theorists in France coming up in the 60’s and 70’s such as Derrida, Foucault, Barthes, and Kristeva nihilistically overturned foundational precepts of Western epistemology such as the infallibility of “reason” or “rationality,” a timeless, universal, self-evident “truth,” the existence of “objective knowledge,” and an unproblematic coherent “self” at the core of human experience. Translated into visual art, this poststructuralist turn meant the de-skilling of art, a shift from close-ended monolithic “works” to work as open-ended text, and a reversal of the notion that the meaning of an artwork lies in a pre-existing transcendent "essence", to, instead, being constructed by the material, social and political discourses surrounding the viewer's perception, interpretation, and reception of the work.


DIAGRAM: The above chart I have drawn diagrams the dissolution of representation within Western art, showing how Western art increasingly abandoned the depiction of “things,” became abstract, then became about the materiality of the medium itself and finally about a kinetic awareness of the space in which the art was placed and its relationship to the viewer, as well as the conditions of its institutional staging. Stage 1 pictures of “things:” Western art governed by Renaissance perspective (Alberti), resemblance, spatial and pictorial illusionism, smooth finish of the Salon painting, painting claiming to be a transparent window to the world (1400-1800’s). Stage 2 modernism: painting begins to call attention to its means of representation with broken brushwork (Cezanne, Manet), painting ‘admits’ its subjectivity, no longer claiming to be a transparent window to the world, innovative relation to form, rejection of naturalism or illusionism (i.e. Cubism) (1800’s-first half of 1900’s). Stage 3 “pure painting:” coined by Clement Greenberg, painting no longer refers to things outside of itself and is not trying to represent things in the outside world; painting distilled to its essence (“zero condition of painting”), medium specificity and flatness not depth. Stage 4 minimalism: rejects modernist idea of autonomous art object, situates art object in a time and space in relation to viewer, and marks a shift from ocular to bodily/tactile mode of apprehending art object (Serra, Judd, Morris). Minimalism is the portal, the catalyst, the turning point, or the “breakthrough” that makes possible even conceptualizing the basis for subsequent art, laying the foundation for the heydey of the 1960’s/70's avante garde: site-specific art, performance art, institutional critique, body art. 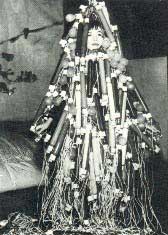 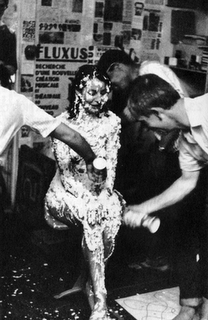